It’s lunchtime in the bottomless pit of horrific grade…itude (yeah, that makes it sound better) and I’m on my second cup of coffee. I now know that 2 is the number of cups I can fit into my travel mug and that 2 cups of coffee is still not enough to wake me up on a day like today.

I know I should not be drinking coffee. Just last week I warned a third of a class full of students how coffee was like a gateway drug and that you shouldn’t use it to keep yourself awake when you really should just put down the cell phone or get off Facebook and go the f**k to sleep. I also told them to practice safe sex. That last one could get me fired but there are just WAY too many students running around with their babies on this campus. Clearly someone needed to tell them what a condom was and how to use one because abstinence only works until someone gets naked and you’re all like “Yeah! Sex!” I’m more concerned about this situation:

Guy with baby tries to hit on random girl.

Girl is all impressed with his, let’s be honest, less than satisfactory parenting skills. The kid’s eating carpet lint. Pick her up.

Guy  talks all about being a dad… Dude, your baby is wandering awfully close to that sharp object….

Guy says they should go out some time. Oops! Baby fell down some cement stairs and hit her head and is now crying!

That man has a baby. If he has time to be dating you he is doing something wrong.

Wow… I really should slow down on the coffee. That and I should probably rethink my whole quadruplets plan. And… hey! Someone messed with my Legos! [Wonder Woman is now aggressively attacking Lex Luthor, she’s hanging on to his laser majigy with her laso, and Superman is on top of the Kryptonium.] Well that doesn’t make any sense…

And now for something completely different:

I made soup for my family’s lunch today. Since we’re all spread out all over the area I even prepacked it into nice little containers. But I forgot the veggie meatballs at home so it’s just soup. I really like soup and think there should be more of it. I also, don’t mind making soup. It’s simple and, if you’re doing it right, doesn’t involve too much cutting up of onions so there’s no crying. Yay!

Here are some upcoming soup ideas to be implemented this week for family lunches: 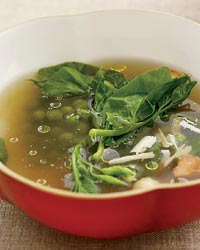 All of these soups, and many others, can be found on the Gastrogasms: Soups and Stews board on Pinterest.

Got something to moan about? Cancel reply